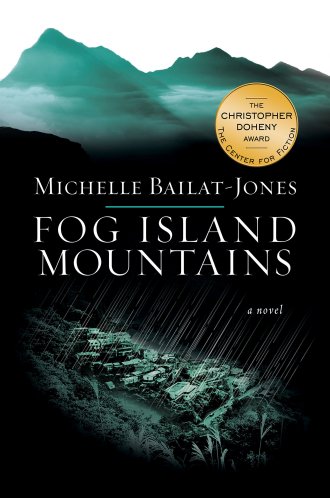 “In Fog Island Mountains Michelle Bailat-Jones takes us on a journey to a remote place, alluring with beauty but also, at times, stark in its proximity to death. Using the poetic tools of a native storyteller, she negotiates the transitions from beauty to sorrow in a gentle, evocative way that urges the reader forward through the landscape of Japan and of the human heart. Fog Island Mountains is an unusual, brave book, refreshingly honest and beautifully written.

Huddled beneath the volcanoes of the Kirishima mountain range in southern Japan—also called the Fog Island Mountains—the inhabitants of small town Komachi are waiting for the biggest of the summer’s typhoons. South African expatriate Alec Chester has lived in Komachi for nearly forty years. Alec considers himself an ordinary man, with common troubles and mundane achievements—until his doctor gives him a terminal cancer diagnosis and his wife, Kanae, disappears into the gathering storm. Kanae’s willful avoidance of the truth leads her to commit a grave infidelity, and only when Alec is suspected of checking himself out of the hospital to commit a quiet suicide, does Kanae come home to face what it will mean to lose her husband.

Narrating this story is Azami, one of Komachi’s oldest and most peculiar inhabitants, the daughter of a famous storyteller with a mysterious story of her own.

A haunting and beautiful reinterpretation of the Japanese kitsune folktale tradition, Fog Island Mountains is a novel about the dangers of action taken in grief and of a belief in healing through storytelling.

Fog Island Mountains won the first ever Christopher Doheny Award from The Center for Fiction (sponsored by Audible). You can read more about the award here and here.

Interview with Beth Anderson for Audible, for launch party of the award and the book.

(The Audiobook is still available and can be purchased directly from Audible.)

“Transporting and lyrical, Fog Island Mountains takes a poignant look into a couple’s struggle with terminal illness, and uncovers the sustaining presence of memory, myth, and history in a small Japanese community. Narrated by the all-knowing local storyteller, who provides a perceptive communal voice, Bailat-Jones’s novel is part poem, part suspense story, propelled by the violence of a summer typhoon, the complications of the characters’ grief, and spare, elegiac prose that weaves its own urgent spell.”

– Karen Brown, author of The Longings of Wayward Girls

“Fog Island Mountains in a literary feast, a gorgeous excavation of perspective and how it shapes suffering.”

“With Fog Island Mountains, Michelle Bailat-Jones has given us a remarkable and memorable debut. Her beautiful and elegantly crafted novel has the breadth of a whole world, yet it reads with the urgency and precision of a finely tuned short story. I was deeply moved by this tale of grief, and I was caught up in all its weather – its wind and rain as well as its many whirling currents of emotion.”

“In FOG ISLAND MOUNTAINS, Michelle Bailat-Jones draws an exquisite unforgettable portrait of a typhoon descending upon a tiny Japanese village but also of the storm in the hearts of those who love and are certain to lose.

– Anne Korkeakivi, author of AN UNEXPECTED GUEST and THE SHINING SEA

“In her capacity to draw the reader into an intimate circle of ordinary people in the grip of extraordinary emotions–where loss is lurking in the shadows–Michelle Bailat-Jones’s work is reminiscent of Siri Hustvedt. Bailat-Jones’s use of the vernacular gathers momentum as it rises to the level of “poetic” to reveal a deeper world, a “flaming world” in Hustvedt’s lexicon, where everyday love retains the power to deliver life-altering shock.”

–Patti Marxsen, author of Hélène Schweitzer, A Life of Her Own

“A true rendering of the Japanese “kitsune” folklore tradition, this is a lovely look at the strength and grace that can be found in the face of death, and the sorrow of the knowledge of passing beauty.”

“Jennifer Ikeda’s quiet, nearly hushed tones add weight to this intimate telling, set in a small Japanese town as a summer typhoon bears down on it. With the cadence of a storyteller or a poet, Ikeda relates the drama of Alec, who’s just been given a terminal cancer diagnosis. As Alec, his wife Kanae, their family, and the townspeople, their lives all interconnected, react, the storm rages. Ikeda shifts beautifully between Alec’s South African-accented English and other characters’ Japanese or Japanese-accented English. As events reach a crescendo, Ikeda’s narration reflects the growing urgency. The emotional story, with hints of magic and folklore, will give listeners much to ponder.”

“Fog Island Mountains is a fearless first novel, and its readers, no doubt, eagerly await the stories that Michelle Bailat-Jones turns to next.” – The Critical Flame

“In the midst of the typhoon, as the first eyewall slams Komachi, Bailat-Jones hits the pause button, the narrator takes us through a meticulously depicted Japanese tea ceremony. For these three pages alone I would urge you to read this remarkably beautiful book, but the entire book is filled with acuity and written in elegantly austere style, with rarely a word out of place. It is a singularly exceptional debut novel with a lot to say about our ‘inept and inelegant lives’.”

“All this is a lot to pull off in one short book – it’s a novel about illness, family, growing old, love, abandonment, storytelling, and the power of language – but Michelle does it beautifully. This is a novel to savor.”

“Atmospheric, profound, this was the deserving winner of the Center of Fiction’s first Christopher Doheny Award.”

“Fog Island Mountains is written in breathless prose, the kind that pull you along constantly, always promising more, always asking for your careful reading, if only to appreciate the beautiful language.”

“Audible is proud to be a part of the publication of this deserving novel,” said Beth Anderson, Audible EVP and Publisher. “Chris Doheny was a writer himself who loved reading, discussing and working with good books, and we’re confident he’d be happy that this fine work of fiction is the first recipient of a prize honoring his memory.”